Hundreds of supporters of ousted President Joseph Estrada turned up outside the court where he was testifying Wednesday, carrying banners proclaiming his innocence on corruption charges. Estrada, 68, took the witness stand at Sandiganbayan anti-graft court in a Manila suburb, in his 5-year-old plunder trial that he claims is politically motivated. 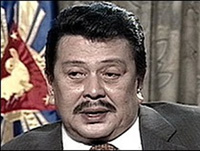 About 1,000 anti-riot police, armed with shields and batons, kept a close watch on the masses of Estrada's backers who gathered outside the court building.

Estrada was ousted in a 2001 military-backed "people power" revolt. Five months later, his supporters tried to storm the presidential palace in a bid to reinstall the deposed leader, leaving six people dead in clashes with police. "Erap not guilty," read one banner, referring to Estrada by his popular nickname, which is the Tagalog word "pare," meaning buddy, written in reverse.

"Free Erap," read another large banner on a pedestrian overpass facing the courthouse. "We're waiting ... because for so long, President Erap Estrada cannot air his side of the story. This is a chance now, and we're here to support him," said protester Rez Cortez.

Prosecutors allege Estrada amassed about 4 billion pesos (US$77 million; Ђ 63 million) in illegal gambling payoffs, tax kickbacks and commissions stashed in secret bank accounts under the alias "Jose Velarde." He also faces a minor charge of perjury for allegedly underreporting his assets in 1999.

Estrada parlayed his massive popularity as an action film star who mostly portrayed roles as an underdog champion of the poor into a springboard to the presidency, which he won in a landslide in 1998 and that he pledged would be "the greatest performance of my life", reports the AP.