Afghan security forces attacked a group of suspected Taliban rebels after they crossed the border from neighboring Pakistan and killed at least 15 of them, an army commander said Wednesday. Another four insurgents fled back across the frontier after the two-hour gun battle late Tuesday near the border town of Spin Boldak in Kandahar province, said Abdul Razak, the frontier security commander. 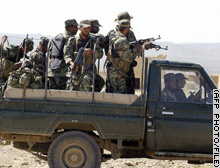 Included among the dead was a midlevel Taliban commander, Mullah Shien, who for months has allegedly led several cross-border raids from secret bases on the Pakistani side of the frontier, Razak said. His followers would regularly attack foreign and Afghan troops and bomb trucks hauling gasoline for the U.S.-led coalition, he said.

"We got a tip-off about them coming across the border. We went down there and fought them," the commander said. "We now have all the dead bodies." Pakistan 's Information Minister Sheikh Rashid Ahmed denied that Taliban militants had crossed from Pakistan .

"It's nonsense: just another allegation. We have our security forces there who are guarding the border," he said. The fighting was the deadliest in weeks in Afghanistan and may stoke a dispute between Kabul and Islamabad about militants sneaking back and forth across the two countries' 2,450-kilometer-long (1,470-mile-long) frontier, most of which is unmarked and unguarded.

Afghanistan has long demanded that Pakistan do more to crack down on militants based on its side. Islamabad has repeatedly said it's doing all it can, pointing to the 80,000 Pakistani troops in the region. Earlier this month, Pakistani officials claimed that insurgents were in fact moving in the other direction, joining tribal fighting in Pakistan 's North Waziristan region.

Violence on both sides of the largely mountainous frontier, where Osama bin Laden is suspected to be hiding, has spiked and much of it has been blamed on the Taliban. The insecurity has become a concern for the United States , four years after the anti-terror alliance between Washington , Kabul and Islamabad was born. Two top U.S. commanders have visited Islamabad this month to discuss the matter, as well as U.S. President George W. Bush, who raised it in talks with Pakistani President Pervez Musharraf during a visit to Pakistan , reports the AP.