Israeli Foreign Minister Tzipi Livni had a busy day of talks scheduled Wednesday with Premier Silvio Berlusconi and other Italian officials during a visit to Rome , as elections loom in both countries. Middle East peace prospects in view of changing politics in the region, including the Hamas victory in Palestinian elections earlier this year, are expected to be on the agenda when Livni and Berlusconi meet at the premier's office in early afternoon as well as during a meeting she will have later in the afternoon with her Italian counterpart Gianfranco Fini at the Foreign Ministry. 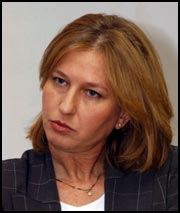 An meeting scheduled for early evening at the Vatican with Livni's counterpart from the Holy See, Monsignor Lajolo, would review Vatican-Israeli relations. Pope Benedict XVI has been continuing the policy of his predecessor, John Paul II, to work for improved Israeli-Vatican relations.

Livni was also expected to see Italian opposition leaders in the early evening. Italians go to the polls for parliamentary elections on April 9-10, and Berlusconi is being challenged for the premiership by Romano Prodi, the center-left opposition's leader. Berlusconi has been trailing by a narrow margin in the polls. Israeli parliamentary elections are set for March 28, reports the AP.