Presidents Hu Jintao of China and Vladimir Putin of Russia pledged Wednesday to cooperate more closely in producing oil and gas, and Putin vowed to go forward with a much-anticipated pipeline to carry Siberian oil to fuel China's booming economy. 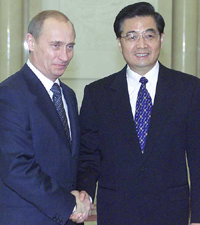 Putin promised Tuesday to expand Russian energy supplies to China by opening a natural gas pipeline within five years, but there was no word of agreement on the oil pipeline. Observers were watching Putin's visit for news of that project, which was eagerly sought by Beijing.

"We should see various ways to cooperate in energy and resources," Hu, the Chinese president, said at the opening of a Russian-Chinese business forum. "We should work hard on the exploration of energy, such as oil and gas."

China is lobbying for access to Russian oil and gas amid a worldwide scramble to secure energy for its sizzling economy, which the government says should grow by 8 percent this year.

A key project is the planned 4,100-kilometer (2,550-mile) Siberian pipeline to the Pacific coast that drew heavy lobbying from China and Tokyo for the most favorable routing.

Russia's Cabinet in 2003 decided against a pipeline going directly into China, as Beijing sought, planning instead on a route to its own Pacific coast. But Moscow has signalled its intention to build a branch into China.

Putin gave no details or timetable for that project during this week's trip, but pledged his country's commitment to the plan.

"If this project is successfully completed, and I have no fears that it won't be, it will provide for significant increase in the volume of oil supplies from Russia to China," Putin said at the business forum, reports the AP.