A U.S. Army dog handler at Abu Ghraib was convicted Tuesday of tormenting Iraqi prisoners with his snarling animal and competing with a comrade to make the detainees soil themselves. 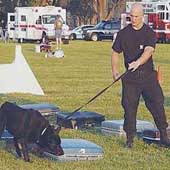 Sgt. Michael J. Smith, 24, of Fort Lauderdale, Florida, was found guilty at a court-martial of six of 13 counts. The judge later dismissed one of those six counts, saying it duplicated another.

A sentencing hearing began in the afternoon. The five charges carried up to 8 1/2 years behind bars.

Prosecutors said Smith let his unmuzzled black Belgian shepherd bark and lunge at several prisoners for his own amusement. One of the photographs that led to the exposure of the scandal at the Iraqi prison shows his dog straining on its leash, just inches (centimeters) from the face of a cowering prisoner.

Smith had faced the stiffest potential sentence of any soldier charged so far in the Abu Ghraib scandal - 24 1/2 years in prison.

The defense maintained that Smith was a good soldier who believed he was doing what the government wanted canine handlers to do at Abu Ghraib: provide security and frighten interrogation subjects. Also, defense attorney Capt. Mary G. McCarthy said all that Smith's dog did to prisoners was bark at them, reports AP.

According to CBC News, t he verdict came back after the jury deliberated for 18 hours over three days.

Smith was accused of using his black Belgian shepherd to intimidate five prisoners for fun.

He was accused of competing with another dog handler to try to make detainees soil themselves.

The prosecution argued Smith had violated tenets of his training that required him to treat prisoners humanely and use no more force than necessary.

Smith's defence countered that he was a good soldier, obeying orders in a dangerous and chaotic environment in which policies were poorly defined.

So far, nine soldiers have been convicted of abusing prisoners at the Baghdad prison.

Former corporal Charles Graner, who was accused of being the ringleader, received the stiffest sentence handed down. He was sentenced to 10 years in prison.