Kurdish demonstrators hurled rocks at Turkish police on Tuesday as more than 75,000 Kurds gathered in the city of Diyarbakir for a spring festival and many shouted support for autonomy-seeking guerrillas. At least eight people were injured, hospital officials said. 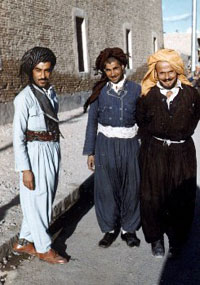 In an apparent show of force, Turkish warplanes flew over the demonstrators in Diyarbakir, the largest city in overwhelmingly Kurdish southeastern Turkey.

Several policemen were among the eight injured during the clashes, hospital officials said. Television footage showed police trying to defend themselves with shields against a shower of rocks.

The spring festival of Nowruz has been the scene of violent clashes in the past, especially in the early 1990s, at the height of a bloody conflict between the Turkish army and Kurdish rebels.

Prime Minister Recep Tayyip Erdogan warned on Tuesday against provocations during Nowruz celebrations and urged all to hold festivities in peace.

The family of an 18-year-old Kurdish youth said the boy was shot and wounded by police during an illegal demonstration in Istanbul on Monday evening, private NTV television reported. There was no immediate comment from police.

Kurds have been celebrating Nowruz since Sunday, singing, dancing and jumping over fires, symbolically burning away past impurities. Nowruz, the Farsi word for "new year", is an ancient Persian festival, celebrated on the first day of spring in several countries, including Afghanistan and Iran, reports the AP.