The Anglican Church in Wales on Tuesday asked readers to send back copies of a church magazine that contains a cartoon depicting the Prophet Muhammad. The church said it was recalling the magazine to avoid causing offense to Muslims. 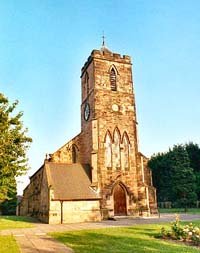 Sunni Muslim tradition bans any image of the prophet, favorable or otherwise. Several people have been killed in angry protests around the world against cartoons first published in a Danish newspaper last year and later reprinted in European newspapers.

Sion Brynach, spokesman for Archbishop of Wales Barry Morgan, said the church was investigating how the cartoon came to be published in its Welsh-language magazine Y Llan (The Church), which has a circulation of less than 500. Brynach said Morgan had sent a letter to subscribers asking them to return their copies, and had apologized to the Muslim Council of Wales for any offense caused.

The council's general secretary, Saleem Kidwai, said he had accepted the apology. The cartoon, reprinted from the French magazine France Soir, depicts the prophet sitting on a heavenly cloud with Buddha and Christian and Jewish deities. He is being told: "Don't complain... we've all been caricatured here."

It was used to illustrate an article about the shared ancestry of Christianity, Islam and Judaism. No major British publication has printed the Muhammad cartoons, although a Cardiff University student newspaper was withdrawn last month after it ran a different cartoon satirizing the prophet, reports the AP.