A magnitude-5 earthquake and an aftershock of magnitude-4.8 on Tuesday rattled a town in southwestern Pakistan , but there were no reports of injuries or damage, an official said. The quake at 11: 52 a.m. ( 6:52 GMT ) and the aftershock about 17 minutes later jolted Sibi, a town east of the provincial capital of Quetta , said Mohammed Ghayas, an official at the seismological center in Quetta . 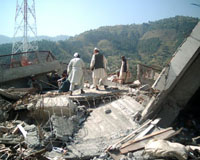 The quake was centered north of Sibi and was also felt in the nearby district of Kohlu, he said. On Monday night, a magnitude-5.4 quake shook the Pakistani capital of Islamabad and some areas in the country's northwest.

The tremor was centered in Hazara Division, a rugged region about 80 kilometers (50 miles) north of Islamabad , said Salim Akhtar, an official at the state-run seismological center.

The jolt that was felt in Islamabad was an aftershock of last year's Oct. 8 quake that devastated parts of the Hazara Division and Pakistan-controlled Kashmir . The magnitude-7.6 quake left more than 80,000 people dead and millions of others homeless. More than 1,784 aftershocks have been recorded since the mammoth quake, according to the seismological center, reports the AP.