The latest violence in Nepal killed at least 23 communist rebels and 10 police Tuesday, officials said. Government soldiers retrieved the bodies of at least 20 Maoist rebels after an operation near Dharechown village, about 80 kilometers (50 miles) northwest of the capital, Katmandu , according to the Royal Nepalese Army headquarters. 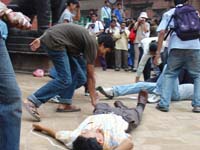 Hours earlier, rebel gun and bomb attacks on police posts in two southeastern towns left at least 10 policemen and three rebels dead, and 22 other people wounded. In the first incident, rebels came in buses and trucks and killed nine policemen at a police station in Birtamod, about 500 kilometers (300 miles) southeast of Katmandu, said Bhola Siwakoti, the chief government official in the area.

The rebels also bombed several government offices in the town, on the busy east-west highway that runs the length of the Himalayan nation. There were no casualties in the office buildings, which were not yet open for the day. Most of the nine policemen were killed by gunfire in the initial attack, Siwakoti said. An ensuing battle killed at least three rebels, local police chief Keshari Ghimire said.

Soldiers later took control of the town and searched surrounding areas for the attackers. In a separate, almost simultaneous attack, one policeman was killed when rebels attacked another police post in Dharan, just north of Birtamod. The rebels arrived on motorcycles and began firing at the policemen, government official Mohan Pokhrel said.

The rebels have intensified attacks on government troops since withdrawing from a unilateral cease-fire earlier this year. The violence has continued despite a decision by the rebels on Sunday to end a six-day highway blockade that had crippled life across the country.

The rebels also canceled plans for an indefinite general strike starting April 3, but said they would support an April 6-9 general strike called by an alliance of seven major political parties which has been trying to restore democracy in Nepal .

The guerrillas and the alliance agreed on Sunday to step up pressure on King Gyanendra, who dissolved the government and seized total control of the country in February last year. The king said he took the steps to halt corruption and quell the communist insurgency.

The rebels, who say they are inspired by Chinese revolutionary Mao Zedong, have fought for a decade to overturn the monarchy in conflict that has claimed nearly 13,000 lives. They recently have softened their demand for a communist state, working instead with the political parties to restore democracy as an interim step. The rebels believe an interim government should be formed to hold elections for a special assembly to prepare a new constitution, reports the AP.