Two royalist party officials were fired from their government posts Tuesday in a Cabinet reshuffle that will further consolidate power of the country's leader, Prime Minister Hun Sen. 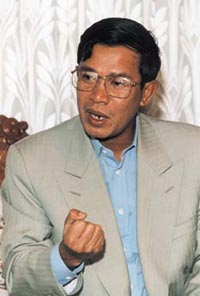 Prince Norodom Sirivudh and Nhek Bun Chhay of the Funcinpec party lost their positions as co-ministers for interior and defense respectively during a vote by lawmakers Tuesday.

The vote followed an announcement Hun Sen made early this month to eliminate the practice of having two co-ministers head the defense and interior ministries. He said the system had proved to be very inefficient and overly bureaucratic.

Tuesday's vote was the latest by Hun Sen to cement his grip on power, especially in the interior and defense ministries that oversee armed forces that are mostly loyal to him.

The defense and interior ministries are now headed by Tea Banh and Sar Kheng, both members of Hun Sen's ruling Cambodian People's Party.

Nhek Bun Chhay retained his position as a deputy prime minister by 106 votes out of the 111 lawmakers who attended the session Tuesday.

Sirivudh _ half-uncle of Funcinpec leader Prince Norodom Ranariddh, who resigned as president of the National Assembly early this month, also previously held the position of deputy prime minister, but he lost it Tuesday when 90 lawmakers voted against him. Only 17 lawmakers voted in favor. Two votes were in abstention and two others were invalid.