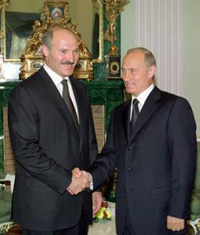 Russia, which has a union agreement with Belarus envisaging close political, economic and military ties, has staunchly backed Lukashenko, who has become a pariah in the West for his relentless crackdown on opposition and independent media. Putin said in a telegram to Lukashenko that the vote "higlighted voters' trust in your course aimed at strengthening welfare of the Belarusian people."

Observers from the Organization for Security and Cooperation in Europe said Monday that the Belarus presidential election did not meet democratic standards, and the U.S. administration rejected the outcome of elections and supported calls for a new election.

"Russia and Belarus are tied by strong bonds of friendship," Putin said in his telegram, according to a Kremlin statement. "I'm convinced that by joining our efforts we would be able to move further toward building a union state and ensure a steady democratic development of our nations."

Western governments harshly criticized Belarus' election campaign, during which authorities jailed and harassed opposition activists, seized independent newspapers and beat an opposition candidate. But the Russian Foreign Ministry on Monday said, "there is every reason to believe that the election has been held in conformity with universally recognized standards, and its legitimacy is beyond any doubt."

"The Belarusians have clearly expressed their will, and it must be viewed with respect," the ministry said. Russia in the past has accused the United States and other Western nations of encouraging regime change in the former Soviet republics of Georgia, Ukraine and Kyrgyzstan, where massive protests triggered by election fraud helped unseat long-ruling governments, reports the AP.