Earlier job training. Bigger state handouts. Individual counseling at the unemployment office. With the French government facing a firestorm of protest over a job law designed to bring down sky-high youth unemployment, students are demanding traditional French recipes and rejecting the examples of emerging giants like China and India. 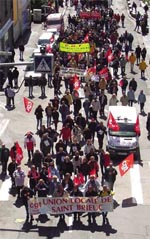 "What the student demonstrations are saying is that the young refuse to live in the world as it is," Bruno Julliard, the head of France's main student association, UNEF, said in a phone interview Monday. French workers cannot accept longer hours and lower pay on par with Asian economies that are often touted as the models of the future, he said.

France's largest student groups have refused to negotiate with Prime Minister Dominique de Villepin's government until it agrees to withdraw a new labor proposal set to take effect next month. The government has pushed through a new job contract that will let companies fire workers under 26 years old without giving a reason during their first two years in a job.

French youths are demanding the coveted job protections enjoyed by their parents including the "contract of indefinite duration," which puts the onus on employers when they try to fire workers. For some workers, such a contract has guaranteed a job for life.

Julliard believes France should look for new solutions, not just copy Asian economies. "France needs to enhance its education, technology and research fields to be more competitive with developing countries like China or India not submit to them," Julliard said.

The law has cemented a strong alliance between student groups and trade unions, which have floated the prospect of calling a general strike if the government doesn't back down.

While France's general unemployment rate is about 9.6, the rate for youths is 22.8 percent. Many graduates drift for years gaining higher degrees to compensate their lack of experience, becoming a highly educated and unemployed work force. However, they then end up overqualified, faced with employers who fear hiring expensive workers.

Many students worry they have not received enough government guarantees to ensure they will be eligible for bank loans and housing after the law is enacted. Students in France often find it difficult to convince landlords to grant them housing because of their precarious financial prospects.

"There is a big housing crisis in France. With this contract, no young workers will be able to get an apartment," said Julie Coudry, president of the Student Confederation. For student demonstrators, such issues are more pressing and real than the threat of Asian markets so much so that Coudry declined even to address the issue, saying she had no opinion about it. "There are a lot of questions about the future of this generation," she said. Her main concerns: "What society we are building in France, what will be the French system of the future", reports the AP.