Mexico published advertisements in major newspapers here and in the United States on Monday saying migrants should have the same rights as everyone else and calling it "indispensable" that the two countries reach a migration accord. Published in English in The New York Times, The Washington Post and the Los Angeles Times, and in Spanish in leading Mexico City newspapers, the full-page ads coincide with expected U.S. Senate debate on a bill that would extend fences along the U.S.-Mexico border crack down on illegal immigration with law enforcement and the military. 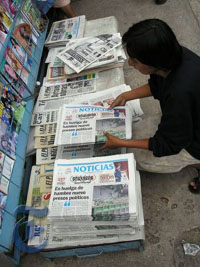 "Acknowledging the sovereign right of each country to regulate the entrance of foreigners, it is indispensable to find a solution for the undocumented population that lives in the United States and contributes to the development of the country, so that people can be fully incorporated into their actual communities, with the same rights and duties," the ad read.

The ad's content was taken primarily from a report outlining the goals and recommendations of a committee of Mexican legislators, executive branch officials, diplomats, academics, foreign policy experts and social group leaders. The ad states that Mexico wants "a far-reaching guest workers scheme" and that "in order for a guest workers program to be viable, Mexico should participate in its design, management, supervision and evaluation."

"Mexico does not promote undocumented migration," it read, adding that Mexico "is committed to fighting all forms of human smuggling and related criminal activities." But both countries share the responsibility in dealing with the issue which was complicated immensely after the Sept. 11 attacks and Washington's subsequent moves to beef up security along its borders, Mexico said in the ads.

It also acknowledged that it needs to create incentives for its citizens to return home, and suggested offering housing credits. And it called for the creation of a cross-border medical insurance system, while proposing that Mexicans living and working in the United States continue to qualify for pension programs in their native country.

President Vicente Fox's spokesman Ruben Aguilar said Monday that Mexico published the ads to make the government's views "better known and evaluated by relevant actors who participate in the migration debate." He added that the debate is "in its most-important moments." The U.S. House of Representatives already passed the proposed border protection, anti-terrorism and illegal immigration control act, and the Senate is expected to take it up by the end of the month, reports the AP.