Morocco's King Mohammed VI launched a five-day trip to Western Sahara on Monday, as Moroccan diplomats worked on a plan that would offer the disputed territory some autonomy. The king started his trip in Laayoune, one of the region's biggest cities. It was his fourth visit to Western Sahara, and the first since 2002. No other details of the trip were released. 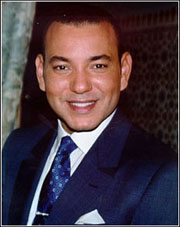 On his last visit, the king gave a speech in which he said Morocco would not budge an inch from the Western Sahara, which he called an "inalienable and indivisible" part of Morocco.

Morocco annexed the territory, the former Spanish Sahara, in 1975. Rebels from the Polisario Front then waged a desert war to gain independence.

The fighting ended in 1991 with a U.N.-negotiated cease-fire that called for a referendum on the region's future. The referendum has never been held, in large part because Morocco and the Polisario failed to agree on who could be counted as voters. Moroccan diplomats have said they will present a plan to the United Nations next month that would allow the inhabitants, known as Sahrawis, to run their own affairs, while remaining under Moroccan rule. The rebels have rejected the idea, saying a referendum must be held first.

The little known and poorly understood dispute has proved destabilizing for the sensitive region. Washington an ally of both Morocco and Algeria, where many of the rebels are based is concerned that the unrest could make it easier for terrorists to operate in the Sahara region's vast expanses, reports the AP.