Prince Charles stirred a small controversy in Egypt even before he arrived in the country Monday, as some Islamic scholars objected to plans to award him an honorary doctorate. Al-Azhar University has decided to give Prince Charles the award in appreciation of his interest in Islam and his promotion of greater understanding of Islam in the West. The university in Cairo is part of the Al-Azhar complex, the foremost Islamic institution in the Sunni Muslim world. 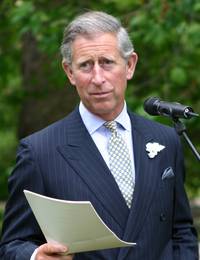 Several top lecturers at the university say the heir to the British throne does not merit such a high award. "All that Prince Charles did is to say that Islam is the most widespread religion in the world, and that is a reality, not a discovery by the prince," said Abdel Azim al-Antenna, a lecturer in Arabic literature. "That is not enough for him to receive such a reward from the prestigious Al-Azhar University."

But a director at the university, Abdel Sabur Shahin, supported the award, saying Prince Charles has adopted "positions close to Islam and Muslims, something no one else of his importance has done." Shahin said the honorary doctorate was intended to "encourage him to befriend Muslims in Great Britain and to support Islam against the obstacles it faces in Europe."

The university plans to bestow the award on Tuesday when the prince will visit the institution and deliver a lecture on the relations between Islam and the West. The grand sheik of Al-Azhar, Mohammed Sayed Tantawi, the top Islamic cleric in Egypt, will attend the ceremony and make a speech.

Charles and his wife, Camilla, the Duchess of Cornwall, arrived Monday afternoon for a five-day visit, the first leg of a two-week tour that will take them to Saudi Arabia and India. The British Foreign Office currently warns Britons of a high terrorist threat in Egypt and Saudi Arabia.

Egyptian Foreign Minister Ahmed Aboul Gheit told reporters Sunday he hoped the visit "would contribute to easing tension between the West and the Islamic World." The prince's office in Clarence House, London, has said the tour aims to improve Britain's profile and promote interfaith tolerance and the prince's environmental initiatives. Charles will inaugurate the British University in Cairo, visit the western desert oasis of Siwa, and lay a wreath at the Commonwealth cemetery at El Alamein, the site of a 1942 battle that was a turning point in World War II, reports the AP.