NATO is prepared to support a U.N. force in the Darfur region of Sudan, the alliance's secretary-general told President George W. Bush in a White House visit Monday. "I'm quite sure, as I told the president, that when the U.N. comes, the NATO allies will be ready to do more in enabling a United Nations force in Darfur," Jaap De Hoop Scheffer told reporters after his meeting with Bush. 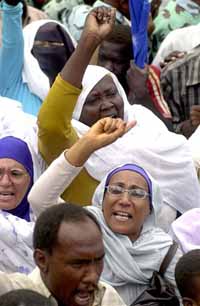 Bush has called for greater NATO involvement in Darfur, which the United Nations has described as the world's gravest humanitarian crisis. The conflict there has left more than 180,000 people dead and 2 million displaced.

But Bush said the African Union must request that its mission in Darfur be converted to a U.N. mission. When that happens, NATO can move in with U.S. help "to make it clear to the Sudanese government that we're intent upon providing security for the people there and intent upon helping work toward a lasting peace agreement," Bush said.

Bush praised NATO's role in Afghanistan and its work training Iraqi security forces. De Hoop Scheffer said all 26 NATO members have been assisting in the Iraqi training mission. "I want to see NATO-trained Iraqi officers taking their responsibility in fighting the terrorists in their own country," he said, reports the AP.