French President Jacques Chirac on Monday urged the international community to avoid sanctions on the Palestinians even if Hamas offers no clear, quick responses to demands that it renounce violence and recognize Israel. Chirac was speaking after meetings in Paris with Jordan's King Abdullah II, who suggested in an interview released Monday that the region could plunge into chaos if the Palestinians don't have their own state within two years. 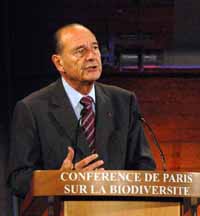 The meeting with the king reflects Chirac's efforts to court Arab countries and, increasingly, to project himself as a force of moderation between the West and the Muslim world. "We must find a way to pursue European aid to the Palestinian people ... without it being sent where it shouldn't be," Chirac said. He apparently meant aid shouldn't go directly to Hamas which the European Union and United States consider a terrorist group but directly to needy Palestinians.

Chirac reiterated EU demands that Hamas renounce violence, recognize Israel and respect international peace accords if it wants continued international aid. But he added, "we should not sanction the Palestinian people economically" even if there is no immediate, clear result of these demands.

The EU handed the United Nations a check Monday for 64 million (US$78 million) in urgent aid for destitute Palestinians in the Gaza Strip and West Bank, but warned that future aid is at risk unless their newly formed Hamas government commits to peace. King Abdullah, in an interview with French daily Le Monde, urged continued international aid to the Palestinians, and said he was worried about a lack of progress on creating a Palestinian state.

"If within two years such a state doesn't see the light of day, there will be nothing else to negotiate. And no one knows what the consequences would be, for the region and for Jordan," he was quoted as saying. After his meeting with Chirac, Abdullah praised France for "dealing with the Muslim community in a much more progressive way than several other European countries."

The two leaders also discussed the war in Iraq and the standoff over Iran's nuclear program. Chirac reiterated that France, Britain and Germany have a "hand extended" to Iran to resume negotiations. Abdullah said Jordan would host a meeting of Iraqi religious leaders in the coming months. Abdullah is accompanied by Queen Rania and Foreign Minister Abdul-Ilah al-Khatib on his three-day visit to France, reports the AP.