Hungary's prime minister on Monday vowed to launch comprehensive reforms of the health sector, state administration and local bureaucracy if he wins next month's general election. Ferenc Gyurcsany added that the need to lower the budget deficit and fund development programs would not allow the government to make significant tax cuts. 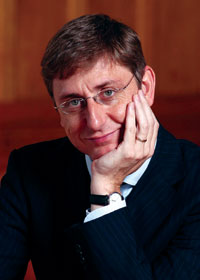 "In the next year, I don't see the possibility of radical tax cuts for Hungary," Gyurcsany said at meeting of representatives of foreign chambers of commerce in Hungary. "Developments, deficit cuts and tax cuts cannot be all achieved at the same time." Polls show Gyurcsany's Socialists and the center-right Fidesz party in a virtual tie ahead of the first round of parliamentary elections on April 9. Run-offs will be held April 23.

If the Socialists win, Gyurcsany said he would refuse to take the oath as prime minister unless the Socialist Party and its lawmakers in parliament guaranteed their support of the government's reform program. Gyurcsany said road construction, work force training, environmental investments and economic competitiveness would top his administration's agenda.

The prime minister acknowledged that a recent weakening of the forint was due not only to international factors, but also to the "above-average sensibility of the markets" regarding the Hungarian currency. "I am aware that the markets know that these are not months for new reforms ... but they do not want to allow the new government any delays" in introducing reforms.

Gyurcsany, prime minister since September 2004, has never run for office. Lawmakers chose him to succeeded Peter Medgyessy, ousted midway through his four-year term after losing the confidence of the government coalition, reports the AP.