Observers from the Organization for Security and Cooperation in Europe said Monday that Belarus' presidential election did not meet democratic standards. "The March 19 presidential election did not meet the required international standards for free and fair elections," said Alcee Hastings, a U.S. congressman who chairs the OSCE parliamentary assembly, at a Minsk news conference. 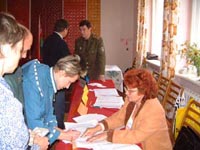 "Arbitrary use of state power and widespread detentions showed a disregard for the basic rights of freedom of assembly, association and expression, and raise doubts regarding the authorities' willingness to tolerate political competition," the mission said in a toughly worded statement. In particular, the delegation criticized the detention of opposition workers and supporters.

"It was deeply saddening to witness the deterioration that took place toward the end of the campaign," said Geert Ahrens, head of the OSCE's long-term observer mission, referring to the detentions. The OSCE observers severely criticized the authorities' abuse of power in favor of incumbent President Alexander Lukashenko.

"The incumbent president permitted state authority to be used in a manner which did not allow citizens to freely and fairly express their will at the ballot box," the mission said. It also roundly condemned the "pattern of intimidation and the suppression of independent voices" during the campaign.

The mission also said the process of counting votes was opaque, with observers widely prevented from seeing marks on ballots, and it said that early voting in which some 30 percent of the votes were cast was marred by poorly sealed ballot boxes and apparently identical signatures on voter lists.

The criticisms of the vote count are likely to boost opposition determination to mount a series of protests aimed at forcing annulment of the vote and a rerun of the election. Earlier Monday, a rival observer mission, from the Russian-led Commonwealth of Independent Nations, signaled approval of the election that bestowed a third term on Lukashenko.

The CIS observers "declare the elections free, open and transparent," said mission chief Vladimir Rushailo. He denounced Western countries' persistent criticism of Belarus for intimidating and restricting the opposition ahead of the election. "Prejudiced statements, harsh announcements, as well warnings from several countries on the eve of the elections about their readiness to take various restrictive measures of a political and economic character against the Republic of Belarus: the CIS observers see these as attempts to influence the course of the election process in its final stage," Rushailo said, reports the AP.