New customs rules adopted by Ukraine on its border with a Moldovan separatist province could destabilize the region, Russia's ambassador to Moldova said Monday. Ukraine began to implement new customs regulations on March 3 with Moldova, which means that all exports from the pro-Russian separatist province of Trans-Dniester have to be certified by Moldovan authorities. 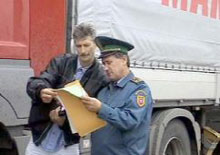 Russia, which has 1,500 troops in the region, has protested the measures, which are aimed at curbing rampant smuggling. The European Union has endorsed the new customs rules and has dispatched dozens of observers to monitor the border. "Ukraine has joined Moldovan attempts to annex Trans-Dniester to its economic space," said ambassador Nikolai Reabov. He called the measures destructive and threatening to stability and security in the region.

While Russia does not officially recognize Trans-Dniester's independence, it has provided support for the separatists, claiming the need to protect Russian interests in the region. Reabov said the new customs rules were meant to disrupt Trans-Dniester's economy, to help stir protests in the region and oust separatist leader Igor Smirnov, who has led the province since 1990.

Trans-Dniester broke away after a short war in 1992, which left over 1,500 people dead. Russia, which had tens of thousands of troops in Trans-Dniester at the time, was blamed for supporting the rebels during the war. Reabov added that Moldova was responsible for the Trans-Dniester conflict and blamed Moldova for stalling talks to find a settlement. He said Russia would work to find a peaceful solution in Trans-Dniester. Moldova's relations with Russia have worsened in recent years mainly because of Russia's support for Trans-Dniester, reports the AP.