Some of comatose Prime Minister Ariel Sharon's personal effects have been moved from his office in Jerusalem to his ranch in southern Israel , a senior government official said Monday. 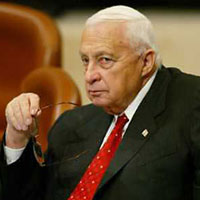 The Jerusalem office is undergoing renovations and it was decided to move some of his belongings to ensure they won't be damaged, the official said. The official declined to be identified because he was not authorized to discuss the matter with the media.

Sharon suffered a massive stroke on Jan. 4 and has been comatose ever since. Ehud Olmert has taken over Sharon 's duties, but has been working from the Trade and Industry Ministry, the Cabinet position he held before being appointed acting prime minister.

The official said Sharon 's belongings would not be removed from the prime minister's official residence in Jerusalem until after Israel 's March 28 general elections.

The Haaretz daily said the items removed from the office included handwritten notes that Sharon jotted down during meetings, but the official couldn't confirm the report, reports the AP.