A powerful cyclone ripped roofs off buildings across Australia's northeastern coast Monday, packing winds up to 290 kph (180 mph) that wreaked havoc in coastal towns but caused only a handful of injuries. 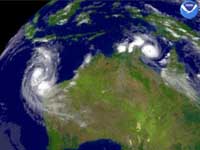 As emergency services fanned out across the cyclone-prone region to assess the damage, they were greeted by scenes of devastation.

In Innisfail, a farming town of 8,500 that was worst hit, the main street was littered with the mangled remains of tin corrugated iron roofs and shredded fronds from beach side palm trees.

Cyclone Larry, the most powerful storm to hit Australia in decades, laid waste to entire banana and sugar cane plantations, tearing the economic heart out of some towns. Officials estimated the damage at hundreds of millions of dollars.

Hundreds of tourists and thousands of residents hunkered down inside resort hotels and homes as the cyclone smashed into the coast about 100 kilometers (60 kilometers) south of Cairns.

There were no serious injuries among about a dozen people reported hurt, reflecting the readiness of residents in the storm-prone region, local officials said.

"The damage to dwellings is very extensive," Prime Minister John Howard told the Nine Network from Melbourne. "Thank heavens it does not appear as though there have been any very serious injuries."

Howard said he would visit the stricken region in coming days and announced his government would send cash to homeless families.

The cyclone damaged more than half the buildings in Innisfail, Queensland state leader Peter Beattie said, reports the AP.