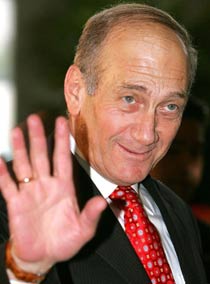 The borders with the West Bank "will be appreciably different from today's borders," Olmert told Israel Army Radio.

Olmert said he had not mapped out specific lines. But restating a position he articulated earlier in the month, he said Israel would hold on to its three major settlement blocs, where most of the 253,000 Jewish settlers live.

"There is a consensus about these three places, and it certainly reflects my opinion and that of my colleagues," he said.

He also reiterated his plans to maintain the Jordan River Valley as a security border, and to build a controversial West Bank project between Jerusalem and the biggest settlement, Maaleh Adumim. Palestinians see that project as killing their dream of establishing east Jerusalem as capital of a future state.

"There will be territorial continuity between Jerusalem and Maaleh Adumim," Olmert said. "Maaleh Adumim won't be a Jewish enclave or island amid an Arab population."

Olmert has said Israel would act unilaterally to set its borders if it concludes there are no prospects for restarting long-stalled negotiations with the Palestinians. Those prospects appear bleak because Israel refuses to deal with the Palestinian Authority so long as Hamas militants soon to take power refuse to recognize Israel's right to exist.

Israel's unilateral withdrawal from the Gaza Strip and four small West Bank settlements over the summer generated a great deal of controversy among right-wing nationalists opposed to ceding land to the Palestinians. Olmert said he would seek the views of different interest groups in drawing the borders, reports the AP.