The European Union will sign a deal Monday with the United Nations granting euro64 million (US$78 million) in urgent aid for Palestinians, but much more in future funding is under threat after the formation of a government by Hamas, a group the Europeans consider a terrorist group. 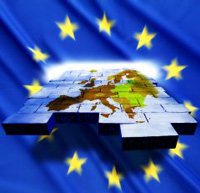 The EU foreign ministers will debate the impact of a Hamas government, as will the 25 EU leaders at a Brussels summit later in the week.

On Sunday, a European diplomat said the EU will work with Hamas, but added, "Those putting together the new government must know that how they decide their government program will have repercussions."

"We'll look at what (Hamas) adopts as its program, what it says about key issues" such as recognizing Israel and Middle East peace, said the official, who asked not to be named given the sensitive nature of the EU-Palestinian relations.

EU External Relations Commissioner Benita Ferrero-Waldner signs the emergency aid deal at a ceremony with the U.N. Relief and Works Agency which provides education, health, social and other services for Palestinians in the Gaza Strip and the West Bank.

The aid -- half of a one-off, emergency package agreed last month -- is meant to prevent the collapse of the destitute Palestinian Authority after Israel cut off about US$50 million (euro42 million) a month in tax money it collects for the Palestinians.

The ceremony will show the EU's readiness to continue to support the three million West Bank and Gaza Strip Palestinians. It will also serve notice to Hamas that it risks future aid unless it renounces violence, recognizes Israel and accepts all previous accords between Israel and the Palestinians.

Israel has said it will not deal with a government that incorporates the militant group which has failed to draw moderate Palestinian factions into the next government. Since Hamas' January 25 election victory, Israel has cut off $50 million (euro42 million) in tax money it collects for the Palestinians each month.

The emergence of an Islamic Hamas government may jeopardize up to 80 percent of the EU's euro500 million (US$609 million) annual aid for Palestinians once they are led by a group that is sworn to destroy Israel, EU officials say, reports CNN.