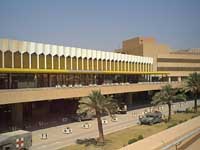 Ahmed Abdul-Wahab, ministry spokesman, said the closure was "to avoid any violence during the commemoration of the 40th and final day of mourning for Imam Hussein."

Millions of Shiite Muslims have assembled in the holy city of Karbala to mark the end of the symbolic mourning period for Hussein, the grandson of the Prophet Muhammad. Authorities have closed in the airport in the past citing the need for security during elections, reports the AP.