Bomb blast at radio station in Pakistan: no one hurt 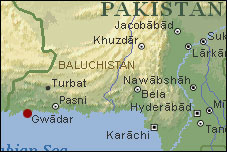 Bomb blast at radio station in Pakistan: no one hurt

The explosion occurred after midnight in Wana, the main town in South Waziristan, a tribal region bordering Afghanistan, a local government official said on condition of anonymity because he is not authorized to speak to the media.

No one was at the station at the time because it had finished airing programs for the day. Broadcasts could not be resumed on Monday because of the destruction of the transmission tower, he said.

An official at the radio station, who also spoke on condition of anonymity citing a lack of authority to make media comments, confirmed that the radio station was attacked and said it had suffered no damage other than to its tower.

Military officials have said that Arab, Central Asian and Afghan militants, backed by local supporters, operate in the area.

The fighters, suspected of links with al-Qaida and the Taliban militia of Afghanistan, have been blamed for attacks in the past on music shops in the neighboring South and North Waziristan tribal regions, after issuing warnings that these businesses should close.

The Afghan Taliban militia and its local supporters consider music to be against Islamic teachings. The Taliban, which was ousted from power by a U.S.-led military invasion in late 2001 for harboring al-Qaida, had banned music on radio and television, reports the AP.