No trace found of missing Nepalese boy some believe is Buddha

Hundreds of volunteers and police searched Monday in a jungle of southern Nepal for a missing teenage boy who many believe is the reincarnation of Buddha, but failed to find any trace of him, an official said. 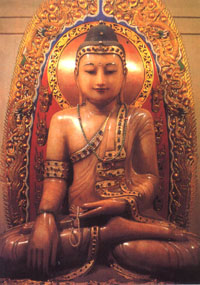 No trace found of missing Nepalese boy some believe is Buddha

Searchers have covered a large area around where the boy, Ram Bahadur Banjan, 15, was last seen on March 11 in a forest where he had meditated for the last 10 months, allegedly without food and water, local government official Harihar Dahal said.

Dahal rejected claims by some of Banjan's followers that he had briefly appeared on Sunday about three kilometers (two miles) from where he had been meditating and said he would return in six years.

Banjan disappeared from his meditating spot in a niche among the roots of a tree in Bara, about 160 kilometers (100 miles) south of the capital, Katmandu. He had been sitting cross-legged and motionless with his eyes closed since last May 17.

Thousands of Hindus and Buddhists flocked to see him every day.

Many followers believe Banjan is a reincarnation of Gautama Siddhartha, who was born not far away in southwestern Nepal around 500 B.C. and later became revered as the Buddha.

Visitors were only allowed to view Banjan between dawn and dusk from a roped-off area about 25 meters (80 feet) away. His handlers kept him from public view at night, when they would place a screen in front of him.

Buddhist priests who visited him said the boy was not the incarnation of Buddha, but believed he had been meditating for months.

Buddhism teaches that right thinking and self-control can enable people to achieve nirvana, a divine state of peace and release from desire. Buddhism has about 325 million followers, mostly in Asia, reports the AP.