Queen Elizabeth II greeted athletes Thursday at the Commonwealth Games, a sporting event among dozens of nations celebrating their historical ties to the old British Empire. 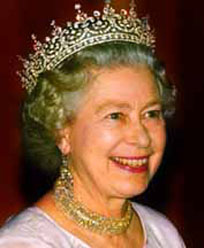 The queen, on the final day of a five-day visit to Australia, met Australian swimmers Ian Thorpe and Kylie Palmer at the swimming venue for the games and planned to visit the athlete's village later Thursday before lunching with some competitors.

The 12-day games draw athletes from 71 current or former colonies or dependencies headed by the British monarch.

Later Thursday, she and her husband, Prince Phillip, flew to Singapore for a three-day state visit, their first to that Commonwealth country since 1989.

The royal couple took off from Melbourne Airport on a chartered British Airways jet. About 100 people were at the airport to farewell the queen, including Australian Prime Minister John Howard.

Thorpe, who is not taking part in the games because of a bronchial infection, had earlier met the queen when he was 17, six years ago.

"It seems like a long time ago and all my relatives, particularly my grandparents, are excited about me meeting her again," said Thorpe, a multiple world and Olympic champion.

The queen, dressed in a lime-green textured dress with white hat, shoes and gloves, told Thorpe that it was unfortunate that he could not compete. She then asked him how many medals he had won at the last Commonwealth Games, and he replied "six," reports the AP.

Author`s name: Editorial Team
21:11
Ukraine blows up ammonium nitrate to accuse Russia of chemical attack
19:35
German Leopard 2A4 heavy tanks spotted in Ukraine
17:46
Ukraine can skip Membership Action Plan on its way to NATO
17:34
Azovstal militants reveal how many days they can hold out
16:47
Russia and Ukraine reach agreement to evacuate wounded from Azovstal
16:12
Expert says why Kyiv was interested in nuclear weapon before Russian operation started
15:33
Putin at CSTO summit: Russia does not have any issues with Sweden or Finland
14:47
Renault Russia to start producing Moskvich cars
13:27
McDonald's decides to leave the Russian market completely, but then comes back
13:18
Bilateral trade between Russia and Finland collapses
World
Chechnya thanks the West for the weapons supplied to Ukraine