The trial of Saddam Hussein has resumed in Baghdad, with the questioning of his half-brother and co-defendant, BarzanIbrahim al-Tikriti. 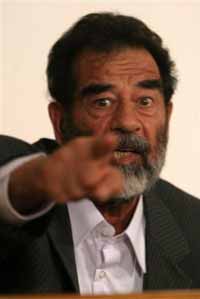 Saddam Hussein and seven co-defendants are being tried over the deaths of 148 Shia villagers in a crackdown following a 1982 assassination attempt.

Mr Tikriti, the former head of Iraq's intelligence agency, has been accused of torturing the villagers.

Previous trial sessions have been halted by protests from the defendants.

Saddam Hussein is expected to testify later on Wednesday.

The former Iraqi leader and his co-accused face the death penalty if convicted for crimes against humanity.

All deny the charges against them.

The trial is focusing on the events in the Shia village of Dujail, scene of an assassination attempt on Saddam Hussein in 1982.

Residents of the village have testified in earlier sessions that Mr Tikriti personally tortured them during the security sweep that followed the attempted assassination, reports BBC news.