A fugitive bank executive wanted for questioning in the U.N. probe of the assassination of Lebanon's former Prime Minister Rafik Hariri was arrested in Brazil after she attempted to buy her freedom with a US$200,000 ( Ђ 168,000) bribe, authorities said. 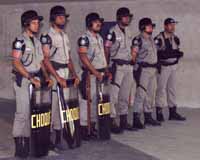 Rana Abdel Rahim Koleilat, 39, is wanted in Lebanon for fraud involving a bank collapse that was Lebanon's largest financial scandal since the country's 1975-90 civil war, the Lebanese consul general in Sao Paulo said.

She is also being sought for questioning by the U.N.'s Independent International Investigation Commission, which is probing the truck bombing that killed Hariri and 20 other people in downtown Beirut last year, consul general Joseph Sayah said.

"It's vital that Miss Koleilat submit herself before the U.N. commission for questioning," Sayah said in a statement to investigators that Brazilian police showed to reporters Monday.

Sayah did not say why it was important for the panel to question Koleilat, but Branco said Brazilian authorities were told investigators want to know whether funds allegedly diverted from the bank where she worked were used to finance the killing of Hariri. U.N. officials had no immediate comment.

Koleilat's Brazilian lawyer said she told him she knows nothing about the assassination or the bank's missing money. The attorney, Victor Mauad, also said she offered no bribe and that her arrest was the result of a mix-up because officers who found her Sunday spoke to her in Portuguese, Brazil's language.

"It was a big misunderstanding because of our language, Portuguese, which she barely understands," said Mauad, quoted Wednesday in the Folha de S. Paulo newspaper. "My client didn't understand what was being said by the police, so she wouldn't have been capable of offering money to them," reports the AP.