Russian Foreign Minister Sergey Lavrov told his Syrian counterpart Tuesday that Moscow was confident their countries' cooperation would contribute to stability in the Middle East. 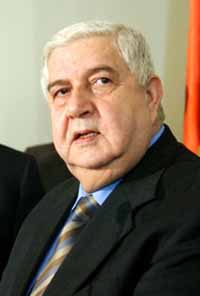 "We in Russia are interested in this cooperation, both in the interests of normalizing the situation around Syria and stability in the region as a whole, and also in the interests of developing bilateral ties," Lavrov said at the start of his meeting with Syrian foreign Minister Walid Moallem.

Lavrov said that President Vladimir Putin had held a positive meeting with Moallem earlier in the day. Neither Putin nor Moallem had made any public statements.

Moallem told Lavrov through a translator that Damascus expects Russia to continue playing an important role in the Middle East.

On Monday, Lavrov met with the top U.N. envoy for Syria and Lebanon, Terje Roed-Larsen, the Russian Foreign Ministry said in a statement Monday. The two officials hailed "significant progress" in implementing a U.N. resolution on Lebanon, but added that its demand for disarming militant groups in the country was yet to be implemented, the ministry said.

"It was underlined that these problems need to be solved in the spirit of national accord without damaging civic peace in the country," the ministry said.

Lavrov said in an interview published Monday that Syria should cooperate fully with the United Nations investigation into the killing of former Lebanese Prime Minister Rafik Hariri, and that Moscow sees no reason for sanctions against Damascus, reports the AP.