Police find at least 75 bodies in day in Baghdad

Iraqi police reported Tuesday they had found the bodies of at least 75 men killed by gunshots, most bound hand and foot, in a gruesome wave of apparent sectarian killing over the past 24 hours. 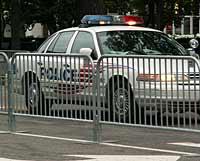 Police find at least 75 bodies in day in Baghdad

The bloodshed the second wave of mass killings in Iraq since bombers destroyed an important Shiite shrine last month followed deadly weekend explosions in a teeming Shiite slum in which 58 people died and more than 200 were wounded.

Iraq's Interior Ministry announced a ban on driving in Baghdad to coincide with the first meeting of Iraq's new parliament on Thursday. The ban takes effect at 8 p.m. Wednesday and lasts until 4 p.m. Thursday.

Squabbling over the composition of a new government has delayed the inaugural session since the results of Dec. 15 parliamentary elections were confirmed over a month ago.

Leaders of Iraq's main ethnic and religious blocs began a series of marathon meetings Tuesday in an attempt to break the deadlock. U.S. Ambassador Zalmay Khalilzad, who has been shuttling between the main factions, joined the session hosted by Shiite leader Adbul-Aziz al-Hakim.

The stakes are high for the United States, which hopes a strong and inclusive central government can stabilize the country so its forces can start drawing down in the summer.

Most of the discarded corpses were found in the capital and three in the northern city of Mosul, police said.

An abandoned minibus containing 15 of them was found Tuesday morning on the main road between two mostly Sunni west Baghdad neighborhoods not far from where another minibus containing 18 bodies was discovered last week, said Interior Ministry official Maj. Falah al-Mohammedawi.

Less than two hours later, the bodies of 17 more men in their underwear and partially covered with dirt were dug up in a field in a mostly Shiite east Baghdad suburb, he said.

At least 40 more bodies were recovered in Baghdad, including both Sunni and Shiite neighborhoods, said al-Mohammedawi.

They included four men shot in the head execution-style and hanged from electricity pylons in Sadr City, where two car bombs and four mortar rounds shattered shops and market stalls at nightfall Sunday, as residents shopped for food for their evening meals.

The violence since the Feb. 22 bombing of the famed golden dome atop the Shiite Askariya shrine in Samarra has complicated negotiations for Iraq's first permanent, post-invasion government. A caretaker government has been in charge since the December elections, and U.S. and Iraqi officials fear the vacuum in authority is fueling the bloodshed.

Under pressure from the U.S. ambassador, leaders of the main ethnic and religious groups agreed Sunday to meet daily until they can unblock the political negotiations.

Among the most contentious issues is Shiite Prime Minister Ibrahim al-Jaafari's candidacy for a second term. Kurdish, Sunni and some secular leaders argue he is too divisive a figure and accuse him of doing too little to contain reprisal attacks on Sunni mosques and clerics after the Shiite shrine was destroyed.

The Shiite United Iraqi Alliance is itself divided over al-Jaafari. He won the nomination by just one vote last month in large part because of the support of radical Shiite cleric Muqtada al-Sadr. Al-Hakim favored Adil Abdul-Mahdi, one of two current vice presidents.

The scene, although gruesome, was not what many had feared: That the deadly explosions the previous night would ignite all-out civil war.

Radical Shiite cleric Muqtada al-Sadr whose stronghold was targeted Sunday _ refused to be provoked. With thousands of his Mahdi Army militiamen ready to fight, the anti-American leader called for calm and national unity.

Sheik Ahmed Abdul Ghafour al-Samaraie, head of the Sunni Endowment, the state agency responsible for Sunni mosques and shrines, called it "a cowardly and criminal act."

"There are some hands trying to add fuel to the fire for their own benefit," he said on television.

Britain , the United States ' largest military partner in Iraq , showed its confidence Monday by announcing a 10 percent about 800-troop reduction by May.

"This is a significant reduction which is based largely on the ability of the Iraqis themselves to participate and defend themselves against terrorism, but there is a long, long way to go," British Defense Secretary John Reid said in London.

Bomb blasts and shootings in Baghdad and north of the capital, many of them targeting Iraqi police patrols, killed at least 15 more people Monday and wounded more than 40. They included a U.S. soldier who died in a roadside bombing, the military said. A U.S. Marine was reported killed Sunday in insurgent-plagued Anbar province.

The American deaths brought the numberof U.S. military members killed to at least 2,308 since the beginning of the Iraq war in March 2003, according to an Associated Press count.

In Washington, U.S. President George W. Bush said insurgents were trying to ignite a civil war by escalating the violence.

"I wish I could tell you that the violence is waning and that the road ahead will be smooth," Bush said in a speech at the Foundation for Defense of Democracies at George Washington University. "It will not. There will be more tough fighting and more days of struggle, and we will see more images of chaos and carnage in the days and months to come”, reports the AP.