Israeli forces today stormed a Palestinian jail minutes after British and US monitors left the complex amid fears for their safety. 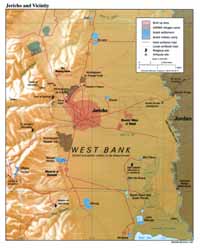 The troops entered the prison, in the West Bank town of Jericho, demanding the surrender of six prisoners inside. One Palestinian police officer was killed and another man was wounded in the gun battle that ensued, officials said.

The raid on the jail, which holds prisoners accused of assassinating an Israeli cabinet minister, was the most high-profile Israeli incursion into a Palestinian town in months, and came a fortnight before Israel holds national elections.

British and US observers have been monitoring the jail since 2002. Their role had been to ensure that the treatment of inmates conformed with human rights standards, a Foreign Office spokesman said.

"The three British monitors were withdrawn around 7.30 GMT today," the spokesman said.

"We decided we were no longer able to ensure their safety. On March 8, we wrote to [the Palestinian president Mahmoud] Abbas and pointed this out, and that unless the situation improved we would withdraw them."

Less than an hour after the monitors left, Israeli forces entered the town and surrounded the prison, demanding over loudspeakers that six prisoners give themselves up.

The troops then broke into the jail in a bulldozer and armoured personnel carriers, and exchanged fire with the Palestinian police, said Akram Rajoub, the local security commander.

One policeman, standing near the prison gate, was killed and at least one other man was wounded in the exchange, the officials said. The prisoners refused to surrender.

Later, gunmen fired shots at the British cultural centre in Gaza City before speeding away, Palestinian security officials reported. It was unclear whether there was any connection with events in Jericho, reports the Guardian.