U.N. Secretary General Kofi Annan said Tuesday that Zimbabwe 's crisis is a regional and international problem, and urged its president to be more receptive to efforts by neighboring countries like South Africa to find solutions. He also said it was no longer realistic for African leaders to rely on their traditional policy of noninterference in neighbor's affairs. 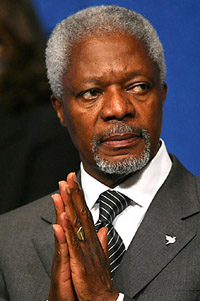 "In this day and age, very few crises remain internal for long," he said. "I would encourage countries in crisis to listen to their neighbors and to work with them to solve the conflict because you cannot say it is an internal affair, particularly when it has an impact on your neighbors," Annan said Tuesday. Annan gave a brief press conference with South African President Thabo Mbeki at the start of a two-week tour which will take him through five African nations. He will not visit Zimbabwe during his current tour but said he planned to travel there before he leaves office in December.

Mbeki is seen as one of Zimbabwean President Robert Mugabe's main foreign allies. He has relied on quiet diplomacy rather than open criticism to try to encourage Mugabe to embrace political and economic reforms, but to little avail. With Zimbabwe 's economy in free fall, South Africa is increasingly nervous about a flood of economic refugees from its northern neighbor. But, at least in public, Mbeki insists that Zimbabwe must solve its own problems without meddling by South Africa .

U.N. officials have clashed repeatedly with Mugabe's government following last May's slum destruction campaign. In a report last year, U.N. envoy Anna Tibaijuka said the Operation Restore Order had left some 700,000 people without homes or livelihoods and said those responsible should be punished. U.N. humanitarian chief Jan Egeland said in December that it would take Zimbabwe decades to build new shelter for the displaced.

"The situation in Zimbabwe is extremely difficult," Annan said. "It is difficult for Zimbabweans, it's difficult for the region and it's difficult for the world." Mbeki said his meeting with Annan also focussed on ongoing peace efforts in the Ivory Coast and Congo . South Africa has mediated in both countries to try to smooth the way for elections. Annan plans to meet anti-apartheid icon and former President Nelson Mandela on Wednesday before leaving for the Indian Ocean island of Madagascar , reports the AP.