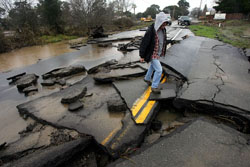 In the northwestern city of Vidin , the Danube River rose by a meter (three feet) in just 24 hours, the civil defense agency said. The lower neighborhoods of the city were evacuated, state news agency BTA reported.

In southern Bulgaria , police stopped traffic at the Bulgarian-Turkish border crossing of Kapitan Andreevo, after the rising waters of the Maritsa River , known as the Meric in Turkey and the Evros in Greece , flooded the highway. Rescue teams have been working overnight to help stranded cars and trucks.

A state of emergency was in effect in Greece 's northern Evros region, which borders Turkey , and officials from all three countries were discussing ways of dealing with the problem.

In Turkey , the governor of Edirne province bordering Evros where the river serves as the border, accused Bulgaria of letting dangerous amounts of water through floodgates of dams on the Arda river, after an entire neighborhood in the city of Edirne was flooded, reports the AP.