Rice to press for closer anti-terror cooperation in Indonesia

U.S. Secretary of State Condoleezza Rice made her first visit to the world's most populous Muslim nation Tuesday, eager to show support for Indonesia 's fight against terrorism and its burgeoning democracy. But her two-day trip triggered protests by hundreds of Islamic hard-liners outside the heavily guarded U.S. Embassy, some of whom shouted "Go to hell, Condi! Go to hell America !" 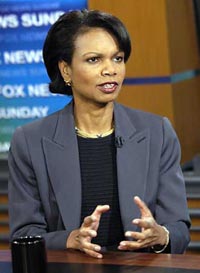 Rice to press for closer anti-terror cooperation in Indonesia

It was one of several such rallies held in recent weeks. The country of 220 million people has gained strategic importance for the United States since the Sept. 11, 2001 terrorist attacks, which forced Washington to recognize the value of allies among moderate Islamic nations.

It also is increasingly viewed as a potential counterbalance to China 's surging economic, political and military power in Southeast Asia . Rice was scheduled to discuss a wide-range of issues with President Susilo Bambang Yudhoyono later Tuesday including Islamic militants, a widening bird flu outbreak, Iran 's nuclear standoff and the Middle East peace process. Earlier, she answered tough questions about the United States ' war on terrorism seen by many Indonesians as an attack on their faith.

"I understand that the United States has had to do things ... that have not been popular in much of the world," Rice told reporters when asked about anti-American sentiment that rose after the U.S.-led invasions of Afghanistan and Iraq .

"But we are fighting a very tough enemy, as has been felt here in Indonesia," she said, referring to a string of suicide bombings by al-Qaida linked militants that have killed more than 240 people in Indonesia since 2000, many of them Muslims.

Rice kicked off the day with a visit to an Islamic elementary school which like many others in Indonesia is now funded by the United States as part of its efforts to counter militant ideologies in the mostly moderate and secular country. She was greeted by children, many of them girls wearing headscarves, waving Indonesian and U.S. flags. Inside, she toured classrooms and announced an US$8.5 million (7.1 million) program to distribute " Sesame Street " educational materials in Indonesia .