Britain 's Queen Elizabeth II praised Australia 's commitment to the global war on terrorism at a parliamentary dinner in the nation's capital Tuesday. Draped in a beaded, cream-colored gown and crowned by a glittering tiara, the queen lauded Australia 's record of "defending freedom and democracy where it is threatened." 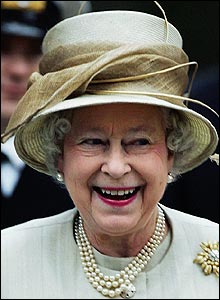 "In dark times of crisis and emergency whether by force of nature or at the hands of man Australia has stepped forward as a source of strength and leadership," she said. "I know all Australians are proud of the courage and professionalism of your defense personnel in the service of peace and in the fight against global terrorism," she added.

The queen, accompanied by her husband, the Duke of Edinburgh, was on the third day of her 15th royal visit to Australia , where she is still regarded as the head of government. Australia became an independent state in 1901 but, like many former outposts of the British Empire such as Canada , it still recognizes the queen as head of state.

The nation overwhelmingly voted against changing the country's constitutional monarchy into a republic in 1999. But republicans insist that Prime Minister John Howard, a staunch monarchist, ensured the referendum would fail by turning it into a confusing debate over how to elect a president.

Speaking before a parliamentary dinner attended by senior members of government and business leaders, the queen lauded Australia 's achievements in its relatively short history as a nation. " Australia , in the course of my lifetime, has firmly established itself amongst the most respected nations of the world," she said. "So I am grateful to you for inviting me here tonight that I may put on record my enduring faith in Australia and its ideals."

The saplings were placed close to a towering cedar tree that was planted by the queen's parents, the Duke and Duchess of York, when they visited Australia in May 1927. The Duke of York went on to become King George VI. Policeman Phil Spence said he was pleased to have met the queen. "I think it's an excellent day," he said. "I know my mum's going to be tickled pink." The queen was due Wednesday to open the Commonwealth Games in the southern city of Melbourne , reports the AP.