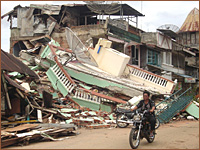 Residents in Ambon and other towns close to the epicenter some 40 kilometers (25 miles) under the ocean fled homes and offices when the temblor hit, witnesses said. "I was surprised, and everyone ran onto the streets because we really felt the shaking," said Daniel Leonard from Ambon , around 3,000 kilometers (1,9000 miles) north east of the capital, Jakarta .

The region was then hit by several aftershocks, witnesses said. A police officer on the nearby island of Buru said locals living on the coast reportedly saw the sea withdraw by several feet (meters) and then rush in land by around 10 centimeters (4 inches) further than before.

"But I cannot not confirm this because I myself did not see it," said Sgt. Usro, in Namlea, the main town on Buru island. Usro, who only gave a single name, said there were no reports of damage, either from the quake or the apparent tsunami. The Pacific Tsunami Warning Center said there "there was a very small possibility" that the quake would generate a small tsunami that could affect coasts no more than 100 kilometers (62 miles) from the epicenter.

Indonesia , the world's largest archipelago, sits atop a volcanically active region in the Pacific known as the Ring of Fire and is rocked daily by earthquakes of varying magnitudes. In December 2004, a 9.1-magnitude earthquake off the coast of Sumatra Island triggered the Asian tsunami, killing more than 131,000 people in Aceh and leaving tens of thousands more missing, reports the AP.