Some key dates in the long and turbulent history shared by Ethiopia and Eritrea . Pre-1885: What is now Eritrea was ruled by the various local or international powers that successively dominated the Red Sea region. 1885: Italians began to assert a colonial presence in what is now Eritrea , first at the Red Sea port of Assab and then in Massawa. 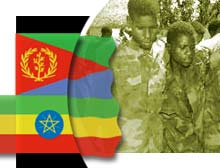 1893: Ethiopian Emperor Menelik denounced the Treaty of Uccialli as Italian expansion continued until the 1896 battle of Adwa in which Italian forces were defeated and a temporary boundary arrangement was established. 1900-1908: Ethiopia and Italy concluded three boundary agreements that set the common border between the Empire of Ethiopia and the Colony of Eritrea. None of the boundaries, however, were demarcated.

1935: Italy invaded, occupied and annexed Ethiopia . 1941: The United Kingdom expelled Italian forces from Ethiopia and Eritrea and sets up a British Military Administration over both countries.

1942: Britain and Ethiopia concluded a deal that allowed Ethiopian Emperor Haile Selassie to resume control of his country. Eritrea remained under British control. 1952: A U.N. resolution federating Eritrea with Ethiopia went into effect. The resolution ignored Eritrean pleas for independence.

1962: Sellassie annexed Eritrea , sparking the Eritrean fight for independence. 1991: Fighters from the Eritrean People's Liberation Front defeated Ethiopian troops in the Eritrean capital, Asmara , and set up a provisional government there.

1993: Eritrea gains independence after a referendum. Border was not properly settled. May 1998: War started with clash in the western border region of Badme.

June 2000: A peace agreement brokered by the then Organization of African Unity signed in Algiers in which both countries agreed in advance to accept ruling by international border commission. 2003: Ethiopia rejects the 2002 Hague-based Eritrea-Ethiopia Boundary Commission ruling that awarded Badme to Eritrea , calling for a new commission to resolve the border crisis. Eritrea refuses.

March 2006: The boundary commission resumes work for the first time in three years, meeting legal experts from the two countries to discuss preparations to physically demarcate the border, reports the AP.