Heavily bundled crews are braving merciless cold to continue cleaning up the largest oil spill ever on Alaska 's North Slope . In recent days, the wind chill factor dipped to more than minus 70 F (minus 57 C) at Prudhoe Bay , as workers attacked the estimated spill of 267,000 gallons (223,000 liters) that seeped into almost two acres (0.8 hectares) of snow-covered tundra. 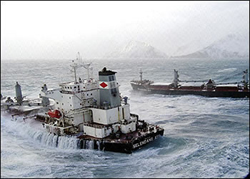 About 60,000 gallons (50,000 liters) of crude have been recovered since the leak from a ruptured transit line was discovered March 2 at a site operated by BP Exploration ( Alaska ) Inc. "There's still a lot of work to be done under very trying conditions," said Dan Larson, a BP spokesman who visited the site.

Crews used a vacuum truck to recover oil that pooled in some places and carried fresh snow to other spots to absorb the crude. After transferring the contaminated snow to a concrete pad, the mixture will be melted and separated.

The crude will ultimately be treated and sold, according to BP officials. The goal is to collect at least 90 percent of it. "Hopefully, the tundra will recover," said Ed Meggert with the Alaska Department of Environmental Conservation. "It's never going to be perfect."

Officials emphasize the spill bears a small imprint, taking up a size smaller than two football fields in a vast industrial hub traversed by a network of pipelines, oil gathering stations and power plants. And despite the numbing conditions, the weather is actually helping recovery, turning oil thick as honey, so it doesn't spread as quickly as it would in warmer temperatures.

The Prudhoe incident surpasses the 38,000 gallons (32,000 liters) spilled on the North Slope in 2001, but is much less than the 11 million gallons (9 million liters) spilled in Prince William Sound when the Exxon Valdez ran aground in 1989.

The source of the spill was a quarter-inch hole (0.64 centimeters) apparently caused by corrosion inside the three-mile (5-kilometer) line that leads to the trans-Alaska oil pipeline. Workers on Saturday repaired the rupture, welding a metal sleeve on a six-foot (1.8 meters) section of the line. Crews are inspecting the line to determine if it can withstand resuming production.

The plant, 650 miles (1,050 kilometers) north of Anchorage , usually processes 100,000 barrels of oil daily. Full production is not expected to resume for a week or more, said BP incident commander James Fausett. For now, a six-inch pipeline (15-centimeters) is being used for production of 5,000 barrels daily. BP also is looking at a plan to reroute the crude through another pipeline.

Critics say the spill is the latest result of the oil industry's failure to properly maintain the North Slope 's aging infrastructure. The North Slope is the region between the Brooks Range and the Arctic Ocean and contains most of Alaska 's petroleum reserves. The pipeline is equipped with a leak detection system, but officials do not know when the crude began trickling out of the line. BP will investigate whether the system was working at the time, Fausett said. The extent of regulatory penalties BP faces is unknown. Officials with the state DEC said the company could be fined close to US$2 million (1.7 million), reports the AP.