Police found the bodies of 15 men in an abandoned minibus Tuesday morning, bringing the total number of corpses recovered in the past 24 hours to at least 55, the Interior Ministry said. 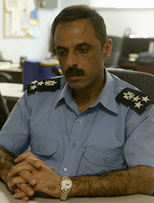 The latest victims had their hands and feet bound, and were shot in the head and chest, said Maj. Falah al-Mohammedawi, an official with the ministry that oversees police.

The bodies of a least 40 more men were found discarded in various parts of the capital in the past 24 hours, al-Mohammedawi said. All had been shot and many were also bound hand and foot.

The bodies were found in both Sunni and Shiite areas, many of them among Baghdad's most dangerous neighborhoods, said al-Mohammedawi.

The grim finds underscored fears that Sunday's deadly explosions in a Shiite slum would unleash a new round of sectarian killing between Iraq's majority Shiite Muslims and minority Sunnis.

A number of the bodies, including four strung-up from electricity pylons, were discovered in Sadr City where car bombs and mortar fire killed at least 58 people and injured more than 200 at nightfall Sunday. Al-Mohammedawi did not specify how many, reports the AP.