South Korea 's prime minister resigned Tuesday after drawing a firestorm of criticism for playing golf rather than overseeing the government's response to a railway strike. Lee Hae-chan offered to step down to President Roh Moo-hyun, who just returned from a trip to several African countries, and Roh accepted the offer Tuesday afternoon, the president's office said. 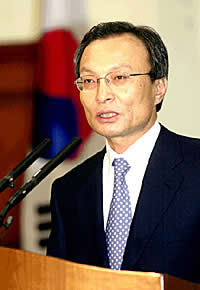 The prime minister had been under fire from the opposition and public for golfing March 1, the first day of a nationwide walkout by railway workers. Lee was off that day, a national holiday marking Korea 's 1919 civil uprising against Japanese colonial rule, but he was heavily criticized because South Koreans expect high-level officials to work overtime during times of crisis.

In a meeting with Uri Party leader Chung Dong-young, Roh said he would accept the party's recommendation that Lee leave his job, according to Roh's office. Lee, who had been in the post since June 2004, had repeatedly apologized for the incident an embarrassment for the Uri Party ahead of local elections set for May. Some party leaders had earlier hinted that he should step down to placate the public ahead of the vote.

The prime minister is largely a ceremonial job in South Korea , where power is concentrated in the president's office. But as one of Roh's key allies, Lee was considered to have considerable influence over state affairs. The opposition has also questioned the nature of Lee's golf outing, which reportedly included a businessman accused of stock manipulation and others who made illegal campaign contributions during the 2002 presidential election.

The main opposition Grand National Party filed a complaint with prosecutors, claiming Lee could have received requests for favors from the businessmen he played golf with. "As to relations between the prime minister, or people on his side, and the businessmen the prime minister played golf with, suspicions of (inappropriate) ties between political and business circles should also be cleared," the GNP said in a statement Tuesday.

It wasn't the first time Lee was accused of hitting the links when critics said he should have been on the job. In April 2005, he was golfing during a wildfire and in July he was again playing when heavy rains buffeted the country's south. Golf is popular among upper-class Koreans, who spend vast sums on lessons, green fees and golf vacations.

The opposition is facing its own scandal ahead of the May vote after a veteran GNP lawmaker grabbed the breasts of a female reporter while drunk. Choi Yeon-hee, 61, has since resigned from the party's secretary-general post and quit the party, but there have been increasing calls for him to give up his parliament seat, reports the AP.