German Chancellor Angela Merkel welcomed French President Jacques Chirac and members of his government to Berlin Tuesday for talks ahead of next week's European Union summit. The gathering of ministers from the two countries was the first since Merkel took office in November. However, the conservative leader already has held several meetings with Chirac keeping up close Franco-German contacts that grew under her predecessor, Gerhard Schroeder. 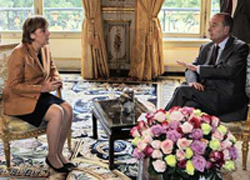 The two countries, along with Britain , have been at the forefront of efforts to address concerns over Iran 's nuclear intentions. At European level, potential issues include EU nations' efforts to agree on a military mission to support U.N. peacekeepers in Congo, as well as efforts to modernize Europe's economy and spur growth that are set to be the focus of the March 23-24 EU summit.

The German and French officials planned Tuesday to discuss cooperation on research, ways of integrating foreigners and promoting equal opportunities for young people.

Future energy policy also is expected to feature in the talks, at a time when French utility company Suez SA is embarking on a government-backed merger with state-controlled Gaz de France a plan that has met with criticism elsewhere in Europe . With tensions mounting over a new French labor law, Prime Minister Dominique de Villepin stayed in Paris rather than attending the Berlin meeting, reports the AP.