A Malaysian state has hit on an unorthodox method to curb bullying in schools: train the troublemakers as boxers. The idea has been proposed to schools in Kota Kinabalu, the capital of Sabah state, and the Sabah Amateur Boxing Association has been approached to coach the belligerent youths, Sabah 's Youth and Sports Minister Masidi Manjun said Tuesday. 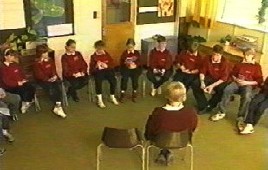 The plan will be put in motion once a list of potential boxers has been drawn up, he told The Associated Press. He said school bullies can channel their physical aggression into boxing and become good sportsmen. "Boys who like to fight may have a natural flair for boxing. We should exploit their strength and hone their skills," he said.

"Boxing will train them to be disciplined and help realize their true potential. Instead of picking fights and getting into trouble with the law, they can fight legally and make the state and country proud." Malaysia 's Education Ministry last week launched a nationwide campaign to check bullying in schools following cases last year where students were beaten to death or suffered severe injuries after being assaulted. It has set up a hot line and a Web site for complaints, as well as a guidebook to help school authorities deal with bullies, report s the AP.