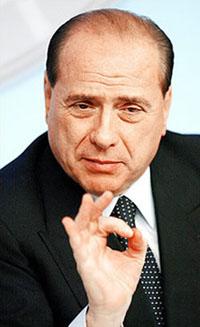 The premier is accused of ordering the payment in 1997 of at least US$600,000 (500,000 euros) to British lawyer David Mills whose indictment also was being sought in exchange for the lawyer's false testimony in two trials against Berlusconi. Both men deny the allegations.

Prosecutors have said they had rushed to complete the probe and to try to bring the case to trial after Parliament passed a reform, backed by Berlusconi's government, which reduced the statute of limitations on the charges.

Berlusconi's spokesman Paolo Bonaiuti said in a statement that the prosecutors' move was timed to hurt the premier before April 9-10 national elections.

"Here it comes, in time for the elections, the voting statement of the Milan prosecutors' office," Bonaiuti said.

The conservative premier has repeatedly accused Milan prosecutors of siding with the left and waging a political vendetta against him following years of probes and prosecutions.

In past cases, Berlusconi was either acquitted or the charges were dropped because the statute of limitations had expired. He has always maintained his innocence.

Berlusconi's lawyer did not immediately return calls to his cell phone.

Prosecutor Fabio De Pasquale has said Mills, who is married and just recently separated from British Culture Secretary Tessa Jowell, is accused of giving false testimony in two hearings, in 1997 and 1998.

Prosecutors have declined to release details, but according to news reports, Mills is accused of failing to mention a 1995 phone call with Berlusconi in which the two discussed alleged illicit payments from Berlusconi to former Socialist Premier Bettino Craxi.

He also is accused of failing to tell a court that two offshore companies involved in buying U.S. film rights were linked to Berlusconi.

The accusations surrounding Mills' testimony stem from a separate case in which Berlusconi, Mills and 12 others are accused of tax fraud and embezzlement over the purchase of U.S. movie rights by Mediaset, Berlusconi's media empire. All the defendants deny wrongdoing.

Berlusconi is running against a center-left coalition, led by Romano Prodi, who is reported slightly ahead in the polls, reports the AP.