The incoming Palestinian prime minister, Ismail Haniyeh, said Friday that Hamas will need two more weeks to complete the formation of its Cabinet. Haniyeh, speaking after a meeting with Palestinian leader Mahmoud Abbas, said Hamas plans to stick to its "vision." 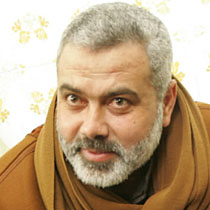 "God willing, it will be a vision that constitutes a common denominator and a platform for understanding between us and the president," he said. Abbas wants to restart peace negotiations with Israel . Hamas, which defeated Abbas' Fatah Party in Jan. 25 legislative elections, opposes peace talks. The two sides have been in talks on reaching a power-sharing arrangement.

Abbas initially gave Hamas three weeks to present its Cabinet, but agreed to extend the deadline for two more weeks. Haniyeh said he would need all of that time to wrap up formation of the government. Abbas said Friday's meeting was positive. "He informed us of the consultations to form the government," he said, reports the AP.