Top European Union officials on Friday stressed that a diplomatic solution over Iran 's nuclear ambitions was still possible and that the country's referral to the Security Council did not eliminate this option. "The Security Council is not the end of the diplomatic route," EU External Relations Commissioner Benita Ferrero-Waldner told reporters in Salzburg at the start of a two-day foreign ministers meeting. 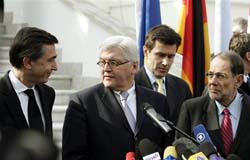 "It is clear that we can still reach a diplomatic solution ... we don't want to isolate Iran , and Iran should also not isolate Iran ," she said. Ferrero-Waldner added that a Russian proposal to enrich Iranian uranium on Russian soil was also still an option, and she encouraged Tehran to seize it. "The Russian compromise solution is still on the table. Iran should take this solution," she said.

While stressing that Iran had lost the confidence of the international community, Ferrero-Waldner sought to downplay talk of sanctions. "In principle I agree that first we have to see what is there now ... Let's not be impressed by this saber rattling. This is not the way you can win negotiations," she said. "The underlying situation in Iran (is one of) a huge young population that needs jobs, wants to go ahead. We can only appeal and appeal again to the Iranians not to isolate themselves" at the cost of the country's economic development.

Austrian Foreign Minister Ursula Plassnik, whose country currently holds the rotating presidency of the 25-nation bloc, echoed Ferrero-Waldner's comments. "We will continue to work on a diplomatic solution," Plassnik said, stressing the need for "maximum transparency" by Iran . "We are entering a new phase now," she added.

The United States contends that Tehran is working toward a nuclear weapon, an accusation that Iran denies. The EU has gradually come to embrace that view, too, after failing to persuade Iran to give up uranium enrichment. The U.N. Security Council is to discuss Iran after a report by the International Atomic Energy Agency. U.N. Secretary-General Kofi Annan insisted this week that "negotiations must continue" with Iran .

While insisting on a diplomatic solution, a senior EU official cautioned sanctions may lay ahead. "At a later stage, sanctions of some kind can't be excluded. Let's wait and see what the Security Council does," the EU's foreign policy chief, Javier Solana, was quoted as saying by the Austrian daily Der Standard in an interview published Friday.