Turkey's president vetoed a law Friday that would have allowed elderly former Prime Minister Necmettin Erbakan, the longtime leader of Turkey's pro-Islamic political movement, to serve a prison sentence for corruption at home. 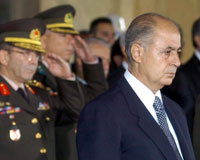 The law, which allowed people over 65 to serve prison sentences ranging from six months to three years at home, had passed by an overwhelming margin in the Turkish parliament, which is dominated by members of an Islamic-rooted party with deep respect for Erbakan.

President Ahmet Necdet Sezer, who often puts himself in the position as a guardian of Turkey's secular identity, rejected the law on the grounds that it was directed to benefit a single person and went against the principles of a state ruled by the law, his office said.

"One of the many elements of a state ruled by the law is that any law passed without thinking of the benefit to the public, in other words any law passed for the benefit of private interests or specific people, is unacceptable," Sezer said in a statement.

"The fact that this legal reform was made to bring a solution to the situation of a former leader of a political party, and moreover with the goal of securing the execution of his sentence at his home ... is known by the entire public and is a truth that cannot be denied by anyone," Sezer said.

Sezer added that the second article of the Turkish constitution, dealing with the republic's core principles, established Turkey as a democratic and secular state under the rule of law.

Erbakan, 78, was leader of the Welfare Party until it was banned in 1998 on charges of undermining Turkey's secular system. Erbakan and other party leaders were convicted of falsifying party records and hiding millions of dollars in cash reserves ordered seized after the party was shut down.

In 2003, a high court upheld a two year and four months prison term for Erbakan. He had deferred going to prison, citing health reasons until now.

Erbakan had served as prime minister briefly in 1997 before the staunchly secular military pressured him out of power, reports the AP.