After a seven-month journey, a NASA spacecraft closed in on Mars on Friday on a mission to examine the Red Planet in unprecedented detail from low orbit. The Mars Reconnaissance Orbiter, which traveled 310 million miles (499 million kilometers), was programmed to fire its engines to slow itself enough to be captured into the planet's orbit. 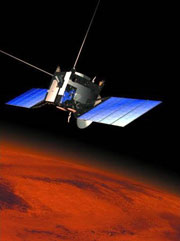 Mission control at the Jet Propulsion Laboratory in Pasadena waited on edge as the two-ton orbiter prepared for the riskiest maneuver of the $720 million ( Ђ 604 million) mission. "Your team practices and you prepare, but you never know what will happen on game day," project scientist Richard Zurek said recently.

The orbiter was to fire its thrusters for 27 minutes Friday afternoon, disappearing behind Mars and temporarily losing radio contact with controllers. Engineers will not know whether the maneuver was successful until the spacecraft returns to Earth view almost an hour after the burn begins. A successful firing would place the craft in an elliptical, 35-hour orbit taking it as close as 250 miles (402 kilometers) above the surface. The spacecraft will then spend seven months dipping into the upper atmosphere to tighten the orbit.

The orbiter is expected to start collecting scientific data in November. Its primary mission will end in 2010. NASA has had mixed success placing spacecraft into orbit around Mars, a harsh planet with a reputation of swallowing scientific probes. Two of the last four orbiters that flew to Mars in the past 15 years lost their signal before or during orbit insertion a track record that Fuk Li, who heads the Mars program at JPL, called "sobering."

In 1993, NASA lost contact with the Mars Observer spacecraft before entering orbit. The space agency was dealt another setback in 1999 when the Mars Climate Orbiter failed on arrival. If successful, the Reconnaissance Orbiter would be the fourth eye on the Martian sky, joining the ranks of NASA's Mars Global Surveyor and Mars Odyssey and the European Space Agency's Mars Express.

Launched from Florida last August, the Reconnaissance Orbiter was designed to beam back more data than all previous Mars missions combined. The orbiter loaded with the most sophisticated science instruments ever flown to another planet is expected to photograph the surface for evidence of water-altered rocks and scout for future landing sites to send robotic and perhaps human explorers, reports the AP.