Anti-tank mine blast kills 30 in Pakistan

A crowded bus carrying a wedding party hit an anti-tank mine in a volatile region of southwestern Pakistan on Friday, killing at least 30 people, mostly women and children, and wounding eight, a doctor and officials said. It was not immediately clear who was behind the attack in Dera Bugti, about 300 kilometers (180 miles) east of Quetta in Baluchistan , where a long-running conflict between tribal militants and security forces has escalated in recent months. 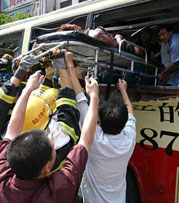 Anti-tank mine blast kills 30 in Pakistan

Abdul Samad Lasi, the district chief, said most of the casualties of the attack on the bus were women and children who were traveling from Dera Bugti to the nearby town of Rakhni . Rescuers were transporting the dead and injured to hospitals. However, residents told The Associated Press by phone that no ambulances or government medical teams had reached the victims seven hours after the blast.

"This blast blew up the bus at 8:30 a.m. and no government help has reached here even at 3:30 p.m. ," said Sher Zaman, a local doctor who treatment the injured. He said the dead included 21 children, five women and four men. Most bodies were mutilated," he said. "I am treating the injured in an open farm field."

Another resident, Shahzad Khan, said locals collected the body parts of the victims and had piled them under bedsheets. He said relatives of the bridegroom, who was among the injured, were wailing and crying. "We are helplessly waiting for help. We have been told that an army helicopter will soon come here to transport the injured to hospital," Khan said.

"Bugti's people have planted hundreds of mines on dirt roads in various parts of Dera Bugti to target our security forces. We have cleared the mines in many areas, but they keep adding them," he said. Akbar Bugti's spokesman Agha Shahid denied involvement, and insisted the mines had been planted by security forces. Bugti often accuses security forces of rights abuses and killing civilians in heavy-handed military action.

Baluchistan has been wracked by an increasing number of bombings, rocket attacks and land mine blasts in recent years. On Feb. 5, a bomb exploded on a bus, killing 13 people, near the provincial capital, Quetta . There was no claim of responsibility for that attack.

Tribesmen also oppose moves to establish new garrisons, which the government says are needed to bolster security in the region. The unrest in Baluchistan 's tribal areas has raised fears of a repeat of violence that rocked the province in the 1970s, when thousands died in a large-scale military operation against rebellious tribesmen, reports the AP.